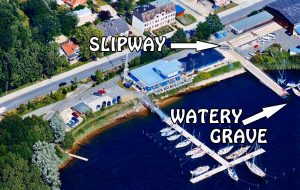 Congratulations to you both on your wedding day. I didn’t think I would be saying that 45 years after we first met. You will remember those wonderful days, when you thought you should do something for your Queen and country so went and joined the Army.

Most of your service, I seem to remember, was spent at the British Kiel Yacht Club skippering “Flamingo”, a 57 foot Abeking and Rasmussen sloop built in 1935 and was used by Herman Goring as a “service yacht” at the 1936 Olympic Games.

By the time I managed to get myself posted to the yacht club for the remainder of my Army service you were already well established and recognised as the “senior skipper”, having been there longer than anyone else and also because you skippered the biggest yacht.

During one winter refit I was tasked with taking care of Flamingo because you were buggering off to crew on the yacht British Soldier on a leg of the 1973–74 Whitbread Round the World Race. In true soldier style and in order to prevent you from getting big headed about it we thought you should have a send off. You were picked up and heaved into the skip and the lid slammed shut. Like an out of control Tesco shopping trolley we manoeuvred the skip to the top of the slipway. At that point we were supposed to let you out but because we were all laughing so much everyone let go of the skip. The laughter slowly subsided as the skip started to pick up speed down the slipway. We all stared at each other then took off down the slip hoping to save you before you went to a watery grave.

As luck would have it one of the wheels caught in the rails of the slip and slowly brought it to a stop just short of the water. That was pretty lucky because if that wheel hadn’t stuck in the rail Matt probably wouldn’t be reading this out now.

All the best once again
Pat Collinge