Annapolis is the home to the United States Naval Academy. A big tradition during commissioning week is for midshipmen from the Class of 2018 to complete the final hurdle of their freshman year by scaling the Herndon Monument. Every year, the roughly 1,000 members of the academy’s plebe class form a human pyramid around the 21-foot tall Herndon Monument to replace a plebe hat, or “dixie cup,” that upperclassmen have placed on the top of the obelisk with the midshipmen cover. Once the freshman class completes this obstacle, they are “plebes no more,” a phrase the midshipmen don’t take lightly.

Unfortunately someone with a weird sense of humour plasters the 21 foot high obelisk with cooking fat making it extremely difficult to grip anything. The time this year to replace the over was 1 hour 38 minutes 36 seconds. 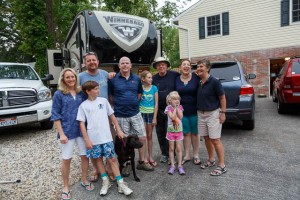 Our parking in Annapolis was courtesy of ex-works colleagues who now live there. It was a bit of a squeeze but we managed to get the trailer on to the drive with a few inches to spare.

We all met up for dinner and it was bit like turning the clock back.

Neighbours were concerned that gypsies might have taken over the landscape. 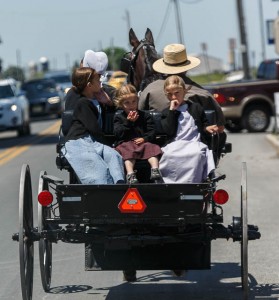 A few days later we were in a completely different landscape and that really was like stepping back in time. The Lancaster County area of Pennsylvania is home to the Amish community who decided to eschew the trappings of modern man and live as they probably did 200 years ago.

Known as Pennsylvania Dutch Country it has absolutely nothing to do with the Dutch at all. When the Amish and Swiss Mennonites came to America, they brought with them their Swiss dialect. Along with the many German-speaking immigrants who came to Pennsylvania, the entire group was termed “Pennsylvania Dutch”. Dutch or “Deutsch” is actually German for the German language. Everyone who is not Amish is referred by them as “the English” regardless of race, colour or creed. We didn’t see any English except us two.