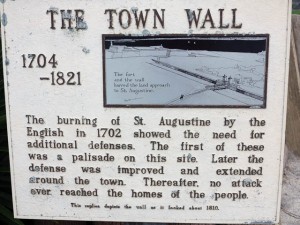 St Augustine is the oldest continuously occupied European-established settlement in the continental United States having been founded on September 8, 1565 by Spanish admiral and Florida’s first governor, Pedro Menéndez de Avilés, who named the settlement “San Agustín”, as his ships bearing settlers, troops, and supplies from Spain had first sighted land in Florida on August 28, 1565, the feast day of St. Augustine. A jolly time was had by all until the British came along in 1702 and burned the place to the ground, again! Sir Francis Drake had also thrown a few matches on the place in 1586. In future, whenever we visit places of historical interest, and we are asked where we are from we’ll say we’re Australian and those Brits were responsible for that too.

We were in St Augustine having a celebratory lunch having just got our brand new trailer away from the dealership and in to an RV park eight miles outside the town. Once a few minor problems had been sorted out we took off northwards to Georgia. Photos we had seen of the cypress swamps had attracted us so our first stop was east of Savannah where we rented a peddle boat on the lake at the George L Smith State Park. That was our exercise for the day, those pontoon boats are hard work.

We were lucky enough to see an alligator cruising along the edge of the trees.

Paddling furiously we tried to head it off so we could get a photo. Unlike crocodiles, alligators would rather not have a confrontation so it sank in to the depths as we got closer to it. Some parts of the lake looked really spooky as the trees got thicker and thicker. It was fascinating but two hours paddling was enough so we returned the boat and sat in the shade to have our picnic. No alligators. Next stop…Milledgeville on the Antebellum Trail.