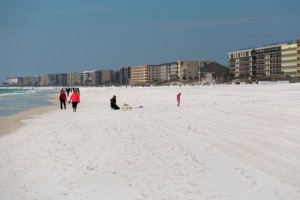 20,000 years ago, at the end of the last Ice Age, a voluminous amount of water comprising the world’s oceans were locked up in the great ice caps on the continents. The sea level was at the time hundreds of feet below present-day sea level and the shoreline was displaced many miles offshore. As the world temperatures began warming the continental ice sheets began melting, thus providing large volumes of water which were subsequently carried by rivers to the world’s oceans.

This water carried the tiny quartz particles from the rock that forms the Appalachian Mountains 120 miles or so to the north and deposited them in the Gulf of Mexico, just 125 miles to the east

of what is now Destin. As the sea level began to rise, these quartz sands eventually formed a new shoreline. The sands today continually replenish and reach as far west as the Pensacola Pass, their final destination.

Lorna is only wearing her big warm jacket to give the impression that it was cold, which it was, just a few degrees above freezing. The weather forecast indicated that it was warmer in central Florida, much warmer. So we hitched up the trailer

and drove down to an RV park not too far from Clearwater. Halfway along our route there was a sudden jump in temperature from 42°F (5°C) to 70° (21°C), almost like driving through a barrier. Now that was more like it. We’ll stay down here until it warms up a bit before moving north.