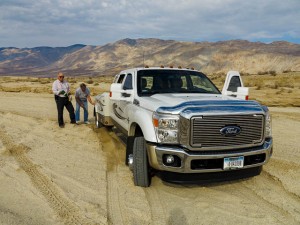 Christmas came and went, so did New Year. Thank goodness all the turkey has been consumed so we don’t need anymore of that for a while. So now what do we do with ourselves we were thinking? A picnic in the desert sounded like a good idea so we loaded up a friend’s truck with food, picnic seats, booze and headed off to the Anza-Borrego Desert State Park. Font’s Point is a raised part of the desert providing a vantage point from which to overlooks the Borrego Badlands. We didn’t reach our picnic spot because 400 yards after leaving the road the truck sank in to the gravelly sand. In hindsight it wasn’t such a bright idea. Some furious digging and we finally got free. So we had our picnic in the desert, 400 yards from the road.
(Photo Gallery updated- click here)

South of the Border

As good fortune would have it, we were presented with some guest passes by an airline pilot friend. (Thank you very much Rob). A quick check on flights and the weather and next thing you know, we were in Cabo San Lucas, Mexico at the very end of the Baja Peninsula.

Finding accommodation was not quite so easy at the height of the season but we did find a small condo in the marina which didn’t cost an arm and a leg. Just like any marina in a tourist resort it was ringed by restaurants, cafes, shops selling perfumes and jewellery and timeshare touts. We resisted everything but the restaurants. After three days we couldn’t help comparing the area with that of the Costa del Sol in Southern Spain. Massive hotels along the beachfront and everything geared to parting tourists from their money, the only difference being the tourists were mostly American rather than British or German. Still, we accepted it for what it was and thoroughly enjoyed ourselves.

The site we had rented was up for sale, which we knew at the time of renting, and sell it did. We had one months grace before having to vacate the site and we were given a couple of alternative sites we could move to. We thought that if we have to pack everything away and hook up the trailer to move a few spaces along the road we might as well keep on moving. At this time of the year it is best to stay in the south and southwest, unless you happen to be in Florida where everywhere is to the north if you wish to stay in the USA that is.

Most of the USA has been experiencing extreme weather with snow, ice and temperatures 30 degrees below the norm so staying well south, mainly on the I-10 interstate would be our preferred route. Our departure date from our little oasis was February 1st so off we set, first stop

Yuma, Arizona. It was only going to be an overnight stop, just long enough to walk across the border in to Los Algodones, Mexico to top up on medication at a fraction of the cost in the USA, so no need to pay to stay in an expensive RV resort. Fortunately the Quechan Casino, owned and run by the Quechan Indian Tribe, has a large gravel parking area for rv’s where you can stay overnight at no cost. It was packed with probably 100 rv’s, the owners waiting for their dental appointment across the border.

Next morning we took off fairly early and arrived at our next stop some six hours later, Elephant Butte in New Mexico and met up with some English friends. There is absolutely nothing to do in this area except fish in the Rio Grande or go for drives in the desert. Which is what we did, drive that is, you can keep the fishing. To be honest the desert is fascinating and sometimes quite beautiful. One day we took off through the Monticello Canyon with our friends leading the way in their Jeep. The canyon is twenty miles long and at an elevation of 6,000 feet.The

year-round flow of Alamosa Creek sustains cottonwood trees, willows and ashes. It had rained heavily some days earlier so the creek was running for quite a way before vanishing through the gravel and sand in to an aquifer. I think we crossed the creek about 137 times during the trip.

We wanted to visit the Spaceport America location from where rockets are launched in to space and from where Richard Branson wants to start his space tourist business. On the Visit Spaceport website there is a big cautionary note advising that you don’t drive out to the location on your own because it is in such a remote location. No services, no phone signal, no amenities plus, if you arrive on your own without paying the $59 for

the official tour you will not be allowed on to Spaceport property. We saved $59 each and drove out on our own. True to their word they didn’t let us in. Just because the Spaceport is situated in what is known as Jornada del Muerto (Journey of the Dead Man), we didn’t let that put us off. In 1680, during the Pueblo Revolt the Spanish settlers were forced to retreat southward, along the Jornada del Muerto, together with Indians from the Isleta and Socorro Pueblos. Of the more than 2000 who left Socorro fewer than 1200 survived the crossing.