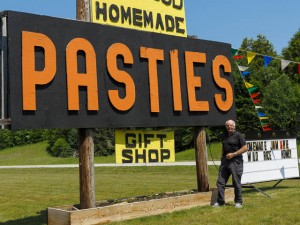 When Cornish miners migrated from Cornwall to Michigan’s Upper Peninsula in the 1800’s, they brought with them their beloved national dish: the pasty. The last mine may have closed in 1995 but the pasty has lived on and is more

popular than ever. Of course we had to try one and after missing a couple of pasty shops, we were towing the trailer at the time, we finally found a cafe where we could pull in without blocking everyone in. It was a tiny cafe and didn’t look very much at all but the owner made over 200 pasties a day which were delivered all over the surrounding area. The pasties were delicious and set us up for the rest of the days drive.

Our trip was taking us through and around the Great Lakes (see Route Map) and after an overnight stop halfway along the Upper Peninsula we finally stopped for a couple of days at Superior, Wisconsin which is at the western end of Lake Superior. Our plans for taking a few super pictures were thwarted somewhat by the dull skies caused by the forest fires in British Columbia and Saskatchewan more than 1,000 miles away. According to the news British Columbia were battling over 200 wildfires and Saskatchewan about the same. To put it in perspective, the fires in total would engulf Wales and a good portion of the Midlands.

Four hours drive north and we were paying our $8 road toll to cross the International Bridge over the Rainy River in to Canada at Fort Frances. As our time in the USA was running out and not wishing to fall foul of the U.S. immigration authorities we thought a trip in to Canada might solve the problem. One of the strangest border crossings we have encountered, winding through a defunct paper mill before having to present our passports and declaring any booze. Being law abiding citizens we had to park and go in to the office to pay $10 duty on a couple of bottles of wine.

Our plan is to turn west and head for the Rocky Mountains. Hopefully we will find something  of interest in the next 1,000 miles of prairie. Watch this space.