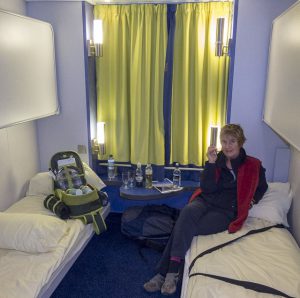 Picnic on the Ferry

We returned to England via Portugal, a drive of 1,132 miles according to our Garmin. That was only to Bilbao in northern Spain though. We still had a 24 hour ferry cruise to look forward to across the notorious Bay of Biscay. Thankfully it wasn’t too wobbly and the passage was pretty uneventful.

As our house is rented out we needed to find somewhere to stay for a couple of months so as soon as we arrived in England we drove to the nearest place where we good get an internet connection and a cup of coffee and toasted sandwich. Stupidly we chose Costa Coffee as it was only five minutes from the ferry terminal. At the checkout I tried to explain to the cashier that I only wanted to buy the coffee and sandwich, not the whole establishment. Robbing swines, we won’t be going in Costan Armandaleg again. Who do they think they are – Starbucks?

We did find a place to stay though, in Poole, Dorset. As we’ve only been back just over a week we haven’t had much chance to get out. Lorna did go out a few  mornings for a run and came back with icicles hanging off her nose. There was one day when the sun actually shone so we jumped in the car and headed off to Lulworth Cove on the Jurassic Coast. The Jurassic Coast is a World Heritage Site on the English Channel coast of southern England. Th

e site stretches from Orcombe Point near Exmouth in East Devon to Old Harry Rocks near Swanage in East Dorset, a distance of 96 miles / 155 kilometres.

The cool weather didn’t put off the tourists who were there in their hundreds. The cliffs are quite unstable, especially after all the rain there has been, so walking close to the edge is not advised. Here are a few photos of the area.