↓
Home→General→Off Again to the USA

It doesn’t seem like six weeks since we arrived in California. In that time we have travelled up in to the mountains of the Sierra Nevada in California, then on to Carson City in Nevada where we went out for a meal with some people we know. It was then a 716 mile trip across Nevada and Utah to a party with Lorna’s distant cousins. After a week there we headed south through Indian country, and it really is Indian country. The Navajo Nation is huge, at 27,000 square miles it is more than three times the size of Wales. They govern themselves and have their own police force.

Most of the south west of the USA is desert so for days we travelled through desert or semi-arid landscape. Amazingly there are some very large cities in the desert. Las Vegas in Nevada for instance and Phoenix in Arizona. Tucson is also in the desert. If it wasn’t for the Colorado river and the very high mountains, 8000 feet plus, then there would be no people living out there. 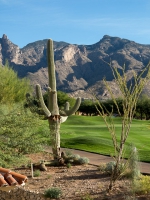 After spending the weekend in Tucson with some friends of Lorna’s who had come over from Scotland to spend a month in a house swap they had arranged, we carried on to Yuma, Arizona. Yuma is a small place close to the Mexican border. In winter it fills up with “Snowbirders”, people with rv’s similar to ours who come from northern USA and Canada to escape the cold winter. As it was only 7 miles to the border crossing we drove down there early one morning, parked the truck and walked across in to Mexico. The town of Los Algodones is just packed with dentist’s, chemists and beauty parlour, apart from dozens of shops full of tourist junk. One of the reasons for going in to Mexico was to stock up on my blood pressure pills I’m supposed to take. I bought four months supply for the same price it would cost just to see a doctor in the USA.

Right now we are in a very smart place in California (Google map http://goo.gl/maps/Nfh31 ) where we have stayed in the past. We thought we would stay here until it is time to leave the USA in March.

That’s about it. All we’ll be doing for the next few weeks is playing golf and baking bread.